An Open Letter to Flat Earth From The IPS:


The International Flat Earth Conference is organized and hosted by associates of convicted pedophiles.


The primary IFEC organizer is personally acquainted with at least 4 sex offenders. This can't be a coincidence. How many sex offenders would you expect to see speaking at a conference?

Why would someone with such a background want to be one of the faces of the flat earth topic? It looks like sabotage to me. Most likely we're seeing the inner-workings of a controlled opposition movement with strategically planted compromised persons.


The conclusion of the IPS is that the Flat Earth movement is led by a "controlled opposition" group which is staffed by pedophiles and their handlers. We will not allow this to continue unchallenged.

Supporters of the controlled opposition will held accountable. They are all being put on notice today, August 9, 2019 (see below).

Share this blog with everyone you know who still believes the Flat Earth movement isn't saturated with deviants controlled by intelligence agents.

The Infinite Plane Society is the only legitamate organization to be addressing this topic. Learn more about us here: http://infiniteplanesociety.com 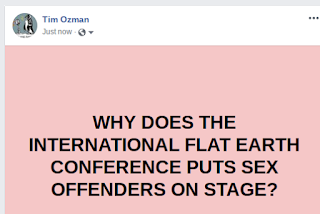 support this blog via cash app/$infiniteplanesociety